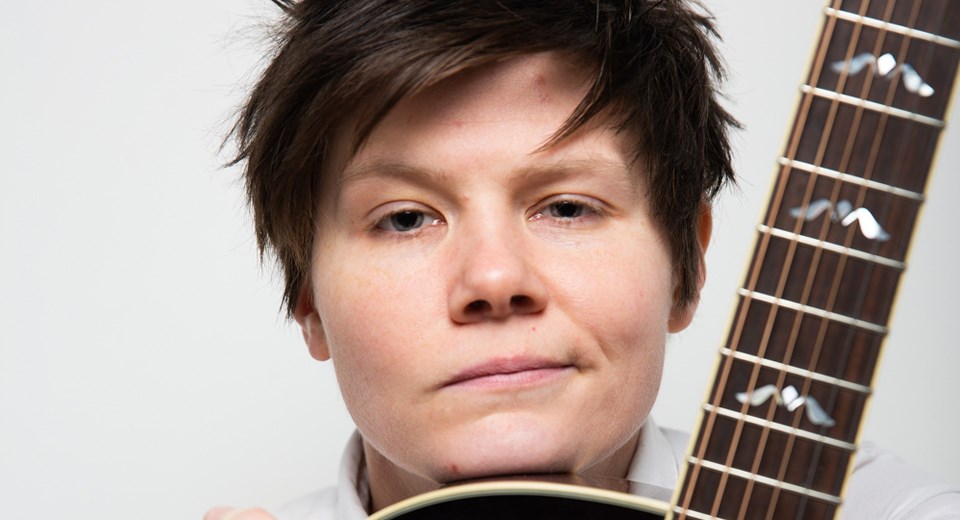 ‘She writes the sort of songs you want to pin the lyrics of on your bedroom wall, or on the office door, to remind you and everyone else who might read them what is important and true’ Buzz Magazine

‘She’s an effervescent charm-bomb of a performer, even alone with an acoustic guitar, as she was that night, singing about Theresa May. “We’re getting standup and music,” a woman next to me said.’ The New Yorker

A folk singer, songwriter and activist from Leicester, UK, Grace has been writing, recording and touring relentlessly for ten years. Her unique takes on life, love and politics, and the warmth and wit with which they are delivered, have won over audiences everywhere, across the alternative, folk, political and comedy scenes.

She has racked up tour supports with Emmy the Great and Billy Bragg, and in 2019 supported Frank Turner on his UK arena tour. She has made her mark in the comedy scene regularly supporting comedians Robin Ince and Josie Long on tour and she has also collaborated with some of the most respected names in folk, including Leon Rosselson, Roy Bailey and Peggy Seeger. She regularly tours sold out shows across the UK and has appeared at an eclectic genre-crossing mix of festivals Latitude, Musicport, 2000Trees, Shrewsbury Folk Festival, Greenbelt, Cambridge Folk Festival and in 2019 packed out The Acoustic Stage at Glastonbury Festival.

Through all of this she has quietly become one of the most respected songwriters working in the UK today. She has been a frequent guest on BBC Radio 4’s the Now Show, has appeared on Channel 4’s Random Acts and has been featured in The Guardian, Diva Magazine and The Independent On Sunday and in 2019 is nominated as Musician Of The Year in the Diva Awards..

In May 2018 a Kickstarter campaign for her first full studio album, after five previous available-at-gig-only albums. She raised £10,000 in just 24 hours and went on to achieve £18.000 in the two week campaign. The album, ‘Queer As Folk’, was released in September 2018 and has gone on to be named a top 10 Folk Album of 2018 by Mojo magazine.

What the media said about Queer As Folk:

‘Queer As Folk may well turn out to be one of my albums of the year’ Folking.com

‘She offers hope and solidarity, born out of absolute conviction and with no trace of empty sloganeering….this wake-up call is one to be both welcomed and wholeheartedly embraced.’ fRoots

‘Petrie has delivered a personal and political statement of the highest quality in a magnificent tradition.’ Morning Star

‘An album of personal and political power, passion and perception, it is hugely persuasive proof that Petrie most deservedly earns her place at the table.’ Folk Radio

‘Just when you thought that what folk music needs right now is a strident left-wing female causing a bit of carnage, here’s Grace Petrie.’ **** Mojo

‘On the Sunday afternoon, it was Grace Petrie’s turn to blow the crowd away. With her mix of English folk and singer-songwriter roots with a punk attitude, her ultra-political songs in defence of butch lesbians, transfolk, the welfare state and the young and angry (and against the Tories and all their works) gave visions of a millennial’s Billy Bragg. With a stand-up’s wit and defiant but cautiously optimistic lyrics, her set prompted tears, fury and joy from this reviewer.’ Songlines review of Boomtown Fair ‘19

Grace did a live session for Jo Whiley on her BBC Radio 2 show in September ’19 including an unforgettable cover of ‘I Will Always Love You’ ahead of her autumn 2019 tour which included 11 sold out dates including Dingwalls in London.

‘She [Grace] is visibly moved by the size and enthusiasm of tonight’s crowd. But not as moved as we are by her music and the genuine warmth of her live shows.’ Final Hours review of Dingwalls, London 4.10.19

‘While it’s easy, then, to fathom Petrie’s political leanings she manages to deliver them in a way that creates a sense of urgency and humour in equal measures. Suffice to say if Petrie is leading the next protest march it will be done with a degree of wry irony and laughter.’ Nightshift review of John The Evangelish Church, Oxford 5.10.19

‘Grace’s earnest songs combined with natural charm make her shows a unique, inclusive environment for everyone… After tonight’s triumph, just imagine how much fun the Wembley show will be in a few years…’ Scene & Heard review of The Leadmill, Sheffield 12.10.19